That an innocent man (Abdelbaset Ali Mohmed Al-Megrahi) was convicted of a crime he was totally innocent of was bad enough, that the CIA and UK government were complicit in this sham was extraordinary and worse still, that the judiciary chose to continue in this utter farce to it’s ultimate conclusion and miscarriage of justice was downright disgusting. So many guilty and just one person paying the price – beyond words.

“I regard the Lockerbie verdict against Megrahi as a ‘Grand Monument to Human Stupidity’.  Indeed, the written opinion of the Lockerbie judges is a remarkable document that claims an ‘honoured place in the history of British miscarriages of justice.’ If the [SCCRC] Commission accepts the application for a full review, the infamous Zeist verdict doesn’t have a snowball’s chance in hell of surviving.” 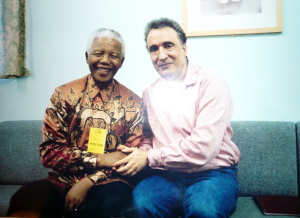 Mandela visiting Megrahi — aka the ‘Lockerbie bomber’ — in prison. Many thanks to my friend John Ashston who took the picture.

On Tuesday July 4 2017, the Scottish Criminal Cases Review Commission [SCCRC] confirmed that it has received a new application to review the conviction in the case of Abdelbaset Ali Mohmed Al-Megrahi.

Here are some of the quotes I have collected over the years. Together they tell an extraordinary story and they should convince the readers that there are indeed “many…