The US and Israel instigated this proxy war for profit, they succeeded in laying waste much of the country by aiding the terrorists and both are now present in Syria illegally in violation of International Law and the UN sits idly by, doing their bidding rather than upholding International Law or even voicing condemnation for it’s violation by these two imperialist/colonialist states……
The US/Israel, the UK/France and Germany along with S.A and other ME “monarchies”, are all complicit in war crimes against the Syrian and Iraqi peoples and the UN sits on it’s hands, on the fence, looking the other way, pretending not to see and thereby empowering the violations of both humanitarian law and the Geneva Conventions……
None of the countries involved in this whole murderous affair will be rebuilding the countries they have destroyed because the UN will not allow any representation by the affected states to seek recompense…..
When will the real Imperialist/Colonialist entities responsible for so much death and destruction, which will continue for as long as they desire to promote it (the Ukraine, Venezuela, Philippines to name just a few) ever be made accountable? Although a rhetorical question, it should still be asked.
Because of US and NATO aggression many refugees are unable to return to their homeland – when will this situation be remedied? 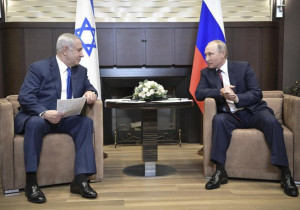 Israel Prime Minister Benyamin Netanyahu travelled to the Russian resort of Sochito meet the Russian President Vladimir Putin, considered to be the “owner of the house” in Syria, in a failed attempt to extract from the Kremlin what could not be obtained from Washington, on its borders with Syria.

As it is well known in every war, the winner imposes the conditions on the loser: the Israeli Prime Minister backed a losing horse and believed – like many world leaders – that Bashar al-Assad would fall in 2012, a few months after the war imposed on Syria. Netanyahu was confident that the “axis of the resistance” (Iran – Syria – Hezbollah) would lose the war and that Damascus would fall under the control of Takfiri-extremists. In fact…