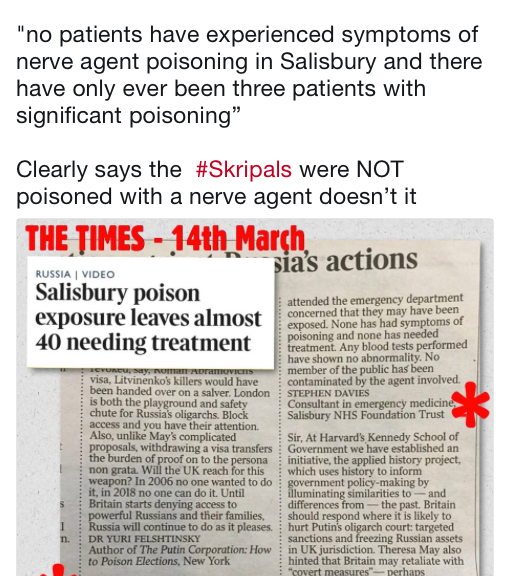 Since we posted a tweet about the seemingly anomalous statements made in a letter to the Times by a senior doctor at Salisbury hospital we’ve seen the issue being raised in many places, most recently on Moon of Alabama.

On March 14 Steven Davies, “Consultant in Emergency Medicine” at Salisbury hospital, wrote the following letter to the Times in response to this article (it’s behind a pay wall unfortunately):

“Sir, Further to your report (“Poison Exposure Leaves Almost 40 Needing Treatment”, Mar 14), may I clarify that no patients have experienced symptoms of nerve-agent poisoning in Salisbury and there have only ever been three patients with significant poisoning. Several people have attended the emergency department concerned that they may have been exposed. None had symptoms of poisoning and none has needed treatment. Any blood tests performed have shown…