“We keep talking about the so call ‘White Helmets’ in the west as heroes, when the people of Aleppo didn’t even know them by this name. They told me those people in the pictures I showed them were DAESH.” 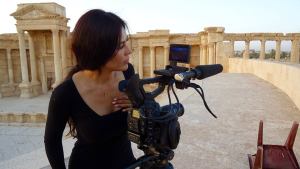 Carla Ortiz spent 8 months in Syria working on her upcoming film titled Voice of Syria, which will be released later this year and will show her interactions with the people of Syria through her various expeditions through the country.

Carla Ortiz is a Bolivian actress, producer, documentary maker. In a shocking Video-Interview, Ortiz ridicules the narrative of the Main Stream Media regarding the conflict in Syria. She speaks about the true role of the White Helmets and the allegations of chemical attacks by the Syrian regime. Follow us on Twitter: @Intel_Today