It all began in 1995, when Recep Tayyip Erdogan, who was then mayor of Istanbul, named a section of the Sultan Ahmet Park in honor of Alptekin. At the official opening of the park, he declared, “Eastern Turkestan is not only the home of the Turkic peoples but also the cradle of Turkic history, civilization and culture. To forget that would lead to the ignorance of our own history, civilization and culture. The martyrs of Eastern Turkestan are our martyrs”.

These people are known by the name Uyghur, and they live in the far Western province of Xinjiang, China.  They are Chinese citizens, but from an ethnic minority.  In 2009 deadly violenceerupted there; however, the Chinese authorities had mentioned earlier in 2002, that a radical Islamic terrorist group, which was supported by foreign sources and under the umbrella of al Qaeda, had been carrying out terrorist attacks in China.

Who are these terrorists and how did they manage to form a base of operations in Idlib, Syria?

The East Turkestan Islamic Movement  (ETIM) operates as the Turkestan Islamic Party (TIP), which is also known as “Katibat Turkistani.” Osama Bin Laden pledged his support for the groupduring a 1999 meeting in Afghanistan.  Its members have trained with Al-Qaeda and the Taliban in both Afghanistan and Pakistan. The US Department of State labeled ETIM as a foreign terrorist organization. On July 28, 2016, TIP became an official faction of Jabhat Al Nusra, which is an al-Qaeda organisation in Syria.

Addition to Turkey’s own role facilitating the build-up of militant armies in southern Turkey seven years ago, President Erdogan firmly backed the US covert operations during the terrorist attacks on Syria, beginning in 2011.  Turkey officially became the transit point of all international terrorists with a final destination of Syria.  Recent scandal reveal the sophistication of the organized smuggling rings being run in and out if Syria via Turkey. The Turkish airlines and airports were full of passengers going on Jihad.  The Turkish businesses were making money hand-over-fist on everything from taxis, hotel rooms, and food; all the way to organ transplants, which were the by-product of the unwilling Syrian donors who were slaughtered.

Another plan was formulated by the Turkish authorities, which saw the issuance of Turkish passports to scores of Uyghurs, where they would leave China on international flights, with their destination being Istanbul, Turkey. Along the journey, some Uyghur were held for questioning in Indonesia, and elsewhere.  The authorities there were suspicious of their Turkish passports, being held by persons who looked Chinese.  When confronted, they insisted they were Turkish citizens traveling as tourists in Asia.  The Indonesian officials summoned the Turkish Embassy, and they surprisingly confirmed they were Turkish. The Turkish immigration clerks at the airport were trained to identify these special passports, and confiscate them.  Thus, once in, the Uyghurs would not be able to leave Turkey, guaranteeing they would be stuck in Idlib, Syria on jihad duty whilst indirectly under the control of the Turkish government.

Brothers-in-Arms: Uyghurs pictured among some of the worst terrorists in Syria (Image Source: Sindo News)

Based on the process of events, it would appear that Erdogan’s plan depended on altering Syrian demographics; by repopulating Idlib province with jihadist Chinese Uyghurs, who attacked Syrian homeowners and farmers, causing them to flee and thus abandoning their properties to the foreigners.  The Turkish President has a vision of a new Turcic colony annexed to Turkey.

Much has been written about President Erdogan’s mercenary army of Uyghurs, who have been in Idlib for years.  The Uyghur mentality does not fit the stereotype of their fellow ISIS and Al Qaeda brothers-in-arms.  The Uyghurs insist on living in their traditional family order.  They didn’t invade Syria alone: they came with wives, children and parents.  Full multi-generational families are living illegally in the rural Idlib countryside.  They established schools for their children, who are taught in the Turcic language, which is the original root of the modern Turkish language.  They occupied homes and farms which are owned by Syrian families who were made homeless by these Chinese Jihadis.

Zanbaqi  is a village located near Jisr al-Shughur, just out of  Idlib.  The tiny hamlet’s residents numbered just 752 in the Syrian national census taken in 2004. However, today there are about 3,500 Uyghur Turkistan Islamic Party (TIP) militants and their families living there, with their military camps training hundreds of children from these families. TIP trains not only Uighur children, but local children to be “little jihadists.” Zanbaqi now looks more like China than Damascus.  Katibat al Ghuraba, or Katibat al Ghuraba al Turkistan (KGT) came to light in July 2017, when their YouTube videos of combat, weapons use, and a training camp/ school for children were uploaded.

Sadly, there are many reports of foreign terrorists, including Uzbek and Uyghurs grooming children for the next generation of jihad: 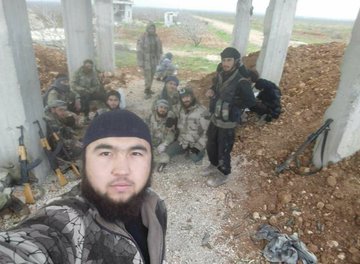 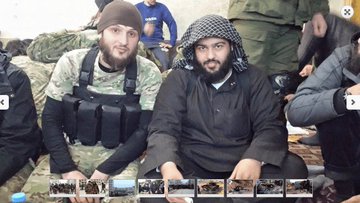 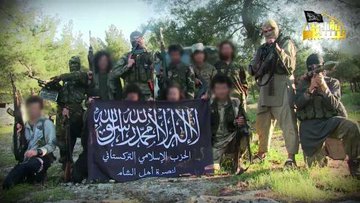 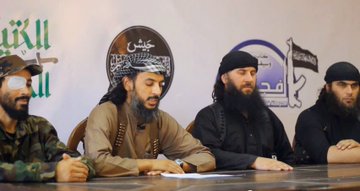 To the people of #Idlib

If these international terrorists don’t care about their own children, and brought them to die in a warzone

Then what makes you think they care about your children?

Time to kick them out! pic.twitter.com/VHmiNnzWj3 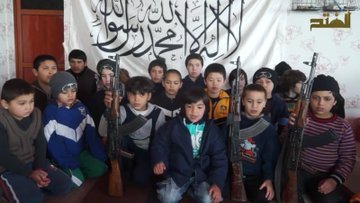 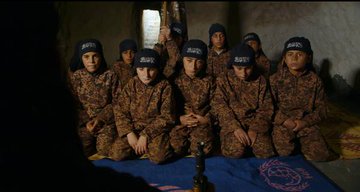 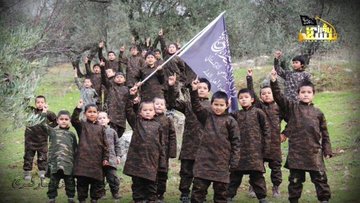 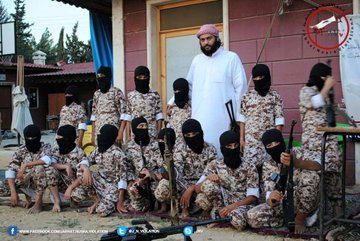 Syria’s ambassador in Beijing, Imad Moustapha, declared up to 5,000 ethnic Uyghurs from China were in Syria fighting alongside armed jihadists as of May 2017. For anyone who has actually followed real reporting on the ground in Syria, you would know that Uyghurs are among the most violent of all the various fighting groups in Syria.  The mere fact that they are alongside Jabhat al Nusra is telling, as they are considered to be the most feared terrorists in the field.  On  June 10,  2015 the Qalb Loze massacre was carried out as the Uyghurs participated hand-in-hand with their brothers-in-arms, slaughtering civilians. Churches and the Christian communities of Idlib region were not spared.  Christians are a minority there, and the Uyghurs and their cohorts preyed upon these communities.  They forced them out of their properties and damaged churches.  Priests were beheaded and kidnapped.

At the 6th round of Astana Talks, for the purpose of a political solution to the Syrian conflict, the 3 participating countries, Russia, Iran and Turkey, agreed to a de-escalation zone including Idlib, in September 2017.  However, the ISIS and Al Qaeda affiliated terrorists groups were never included.  The UN resolution 2254 clearly states all UN member states must fight terrorist groups, such as ISIS, Al Qaeda, Jibhat al Nusra and other radical armed jihadists.  Because Idlib has been home to thousands of foreign jihadists, as well as the very small community of Free Syrian Army (FSA), who the UN, USA, and NATO call “moderate rebels”; the “War on Terror” began by President George W. Bush was held in limbo.  The Russian, Syrian and Iranian position was to follow international law, and the letter of the UN 2254, which makes it clear that fighting the ISIS and Al Qaeda, and their affiliates, is the only way forward, in the path to restoring peace and security to Idlib.

Earlier this month, Russia’s special envoy on Syria Alexander Lavrentiev told reporters after talks in Geneva with UN envoy Staffan de Mistura, that it is up to Turkey to separate Islamist militants from the moderate opposition in Idlib. As it stands now, Russia and Turkey have negotiated a peaceful impasse which, if it holds, may avert what would certainly be a bloody affair in the final battle.

The other half of the story in Idlib is missing in mainstream media.  Where is the story of millions of civilian hostages and human shields who have suffered in Idlib since the terrorist occupation in began in 2013?  What about the men prevented from leaving, where residents were threatened with death if they didn’t stay to defend Idlib from the final battle? Note how as the last battle in Idlib was approaching, real civilians reported the terrorists were not allowing them to leave. What about the women used as slaves by the terrorists and foreign interlopers?  What about the children prevented from accessing a normal education, and forced into servitude by the terrorists?  Those stories will eventually be told the survivors. Either way, the real untold stories of Idlib will come out, although much to the chagrin of propaganda outlets like CNN and others who have taken it upon themselves to be the PR adjuncts of al Qaeda in Idlib.

We currently see Uyghurs living abroad in USA being interviewed on mainstream western media.  They are adept at getting their message to Western audiences, who are sympathetic to the plight of the under-dog, and the ‘freedom fighter’ stance so dear to American revolutionary cultural mythos. This was followed by the proverbial ‘Uyghur wave’ which swept across the Western and Gulf media, with well-known mainstream commentators all chiming-in (at the same time) with words of solidarity for the Uyghurs in China, and not surprisingly, none of them mentioned the violent escapades of this Western and Gulf-backed terrorist army encamped in Idlib:

One million Muslim Uighurs may have been detained by the Chinese government – where’s the global outrage? My piece for ⁦@theintercept⁩ from last month: https://theintercept.com/2018/08/13/china-muslims-uighur-detention/ …

One Million Muslim Uighurs Have Been Detained by China, the U.N. Says. Where’s the Global Outrage?

China’s campaign against its minority Uighur population is a campaign of ethnic cleansing justified by “war on terror” rhetoric.

Who | Uighur Muslims are a minority group populating Western #China

What | They are being persecuted because of their ethnicity and religion

How | 1 Million have reportedly been placed in internment camps

Why | Read this article by @mehdirhasan – https://theintercept.com/2018/08/13/china-muslims-uighur-detention/ … 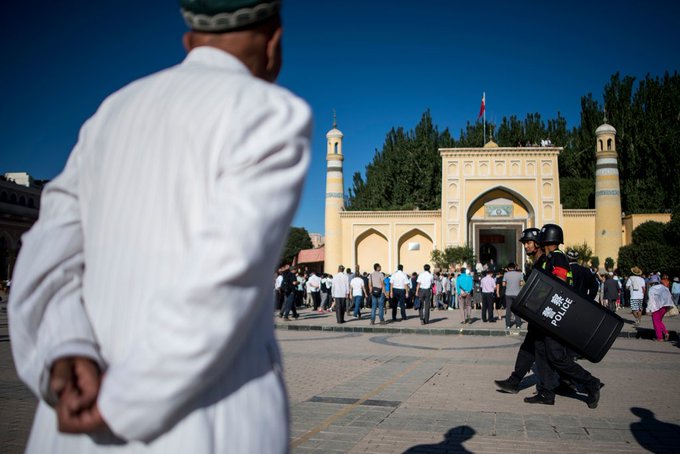 Asked abt mass internment of Muslims, Chinese official says “maybe it’s the necessary way to deal with Islamic or religious extremism…Look at Belgium, look at Paris…You have failed.” US must stand strong for democracy around the world or risk Chinese approach spreading

All of this is building a case for Arab, Muslim and Western support of the Uyghurs, in their impending face-off with China. Eurasia will be the battle ground, and disrupting the Belt and Road project seems to be the raison d’etre of that effort. Westerners need to ask themselves if they would like armed terrorists living next door to them (or with them, in the case of Syria), but if they terrorize people in Syria or China, that’s ‘alright,’ as far as the western mainstream polity is concerned. In that inverted reality, the terrorist becomes the victim according the mainstream media’s spin cycle.

On August 1, 2018, the Chinese Ambassador to Damascus, Qi Qianjin, said that the Chinese military would be willing to participate in the battle in Idlib, while expressing regret that Chinese Uyghurs were involved as terrorists. Bearing all this in mind, no should really be surprised then that China and Russia joined-up to stage the largest military exercise in those two country’s history:

China participating in giant Russian military exercise. Tells you all you need to know about the ham-fisted ineptitude of recent Western diplomacy. Far from isolating Russia, it has drawn much closer to the next dominant superpower.

When it’s all said and done, history may look back at Syria as another Western regime change debacle. But even if that’s true, as with Afghanistan and Kosovo, their Mujahideen will simply be re-deployed to a new theater.

Then the real question is: will Operation Cyclone ever end?

21WIRE Special Contributor Steven Sahiounie is an American citizen born in Fresno, California.  He has been living permanently in Latakia, Syria, which was his father’s original hometown.  Steven is a freelance journalist specialising in Syrian affairs, and a university student studying English Literature. See more of Steven’s featured work here.