Albright, Clinton, Obama, Carter, Bush, Breedlove, Powers, Rice, Nuland, along with Blair, Cameron, Benn and many other Washington and Ministerial murderers. No ethics, no moral conscience and no regard for either International Law or Humanitarian Law. All deserve to be on a special list of “Targeted Killings” they have done more evil and slaughtered far more than cystisis ever could. Add up all the US/UK instigated wars and the subsequent associated death tolls and between them they have massacred millions. Hell is too good for them.

by Kurt Nimmo, via Russia Insider

Back in February, the former Secretary of State under Bill Clinton said “there’s a special place in hell” for women who do not vote for Hillary Clinton. Madeleine Albright made the remark during a campaign stop in Portsmouth, New Hampshire 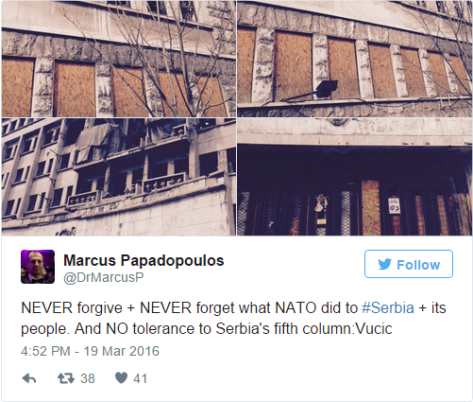 NATO “deeply” regretted killing at least seventeen people when a bomb hit a bus packed with women and children. It also supposedly regretted killing fifteen people after it targeted a hospital with a cluster bomb and killed three diplomats at China’s embassy in Belgrade. After Serbian television criticized Albright and Clinton, it…